Robots are widely regarded as irreplaceable when it comes to weld preparation and bevel cutting on already cut parts. MicroStep has brought an alternative to the market, which has seriously shaken the robots’ position in this regard. This innovative technology is called ABP – Additional Beveling Process – and it allows very precise subsequent beveling with gantry-type CNC cutting machines. 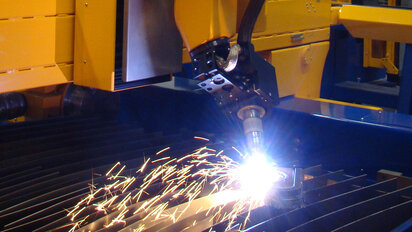 Subsequent weld preparation is a standard procedure for cut parts in many areas of the metalworking industry. Manufacturers of machinery and materials for power plants, turbines, pumps, mining equipment and others often work with very large steel thicknesses, so the parts cannot be immediately cut with bevels – either due to technology limitations or because it would mean a significant waste of material.

In case of big material thicknesses, bevel preparation on parts has traditionally been a two-stage process. First, the desired contour is cut on a conventional cutting machine with a straight tool, e.g. by plasma or oxyfuel. Then, the cut part will be taken out and moved to another workplace, where it will be processed by a robot, which will add bevels to the contour in preparation for a subsequent welding process. 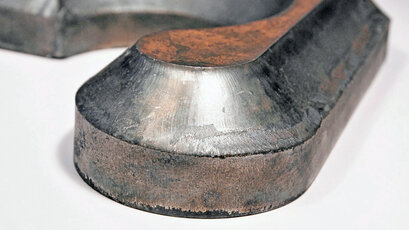 Based on MicroStep‘s long-term experiences in bevel cutting and process control, the company developed a technology involving laser scanning of parts along with software tools that enable programming of additional bevels on parts. The process was named ABP – Additional Beveling Process. ABP proves to be superior to the standard two-stage process in terms of efficiency as well as quality. And it comes with only a fraction of the investment cost that would be needed for a robotic workstation.

“The initial question we asked ourselves was why you should require a robot for the subsequent weld preparation in the first place,” explains Alexander Varga, development chief and co-founder of MicroStep.Because modern CNC cutting systems from MicroStep are equipped with an endlessly rotating R5 rotator and therefore already have the possibility to make precise bevel cuts of up to 50° (plasma, oxyfuel & waterjet) on sheets, tubes, profiles and domes. 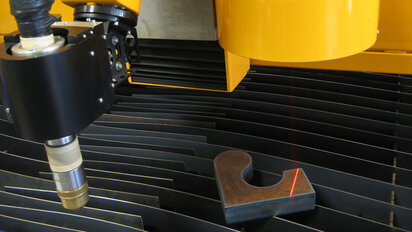 In order to enable a MicroStep machine to use the additional beveling function, the machine has to be equipped with one of MicroStep’s bevel cutting tool stations and an additional scanner unit. The unit can be attached to the bevel head or mounted on a separate tool station – depending on the particular machine configuration and desired application. The process then unfolds as follows: First, a 2D drawing of the pre-cut part is imported into MicroStep’s CAM software AsperWin®. The machine operator defines the required bevels in AsperWin’s user-friendly interface. The system then generates a cutting program for additional beveling. To find the exact position of the part on the cutting table, the machine will use the ABP scanner. During the scanning process, the real contour of the part is compared with its ideal shape from the drawing and if slight differences are detected (a real part is hardly ever completely accurate), the system will align the cutting program with the real shape to achieve the most accurate cutting result possible. After the starting point of cutting is verified, the cutting process begins. The system can make V, Y, X and K bevel cuts (whereby for K and X cuts the part needs to be turned and scanned again after the first cutting round is completed). Obviously, the technology allows to scan and process parts made with completely different technologies – for example, thick parts cut with oxyfuel can be subsequently beveled by plasma, or parts pre-cut with plasma can be cut with ABP by fiber laser. Thanks to MicroStep‘s unified concept of bevel cutting equipment and its easy setup via the patented ACTG® technology, the ABP process is fast, reliable and easily applicable to all cutting technologies – plasma, laser, oxyfuel as well as waterjet. 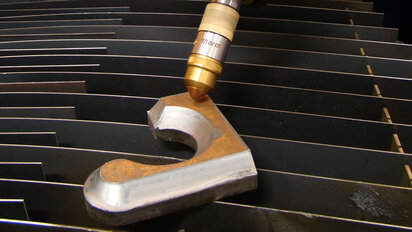 Compared to additional processing of pre-cut parts with a robot, ABP technology offers several clear advantages: the complete process (2D cutting and additional beveling) can be done with the same machine – this saves space in production and, above all, the time that is otherwise spent with part manipulation. In addition, the cost of adding a laser scanner to a MicroStep cutting machine is significantly lower than the investment in a separate, dedicated robotic workplace. On the other hand, cutting results that can be achieved on a gantry- type machine are more precise due to the generally higher rigidity of the cutting machine.